Fes Morocco – The city of Fes is one of Morocco’s most beautiful treasures! It is considered to be the cultural and spiritual capital of the country and is a great place to visit. Fes is also a historic city that played an important role in Morocco’s history. In fact, it was the first city in the country to be converted to Islam. It was founded in 788 by Idriss Ben Abdallah, who also founded the Idrisid dynasty, the first Muslim dynasty in the Maghreb. 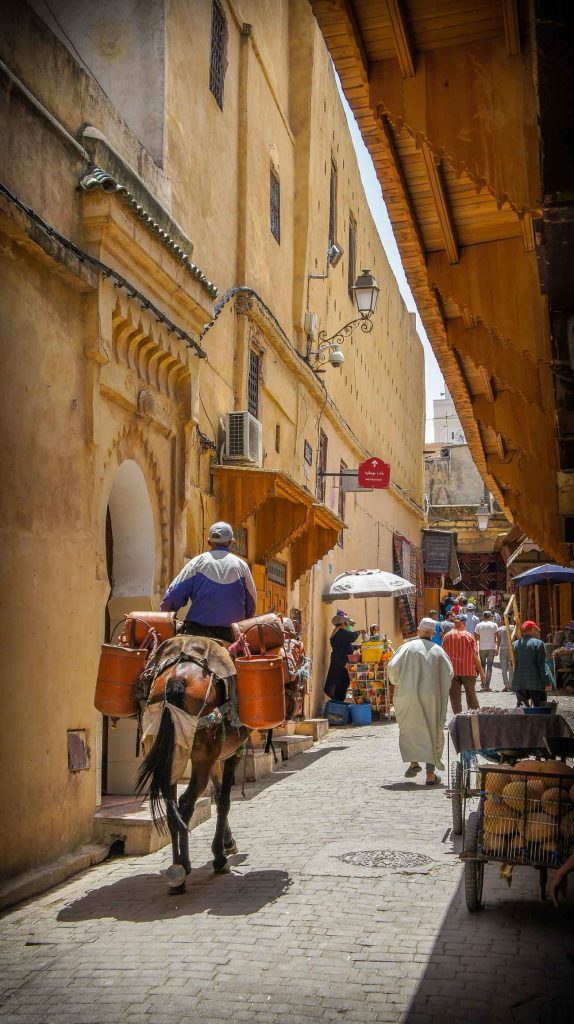 In 2013, King Mohamed VI launched a major renovation project to renovate the Medina of Fes. The restorations have preserved all the charm and authenticity of the monuments and made them sturdier and more resilient to stand the test of time.

Here are a few transportation and accommodation tips before we get into the city’s most interesting attractions! 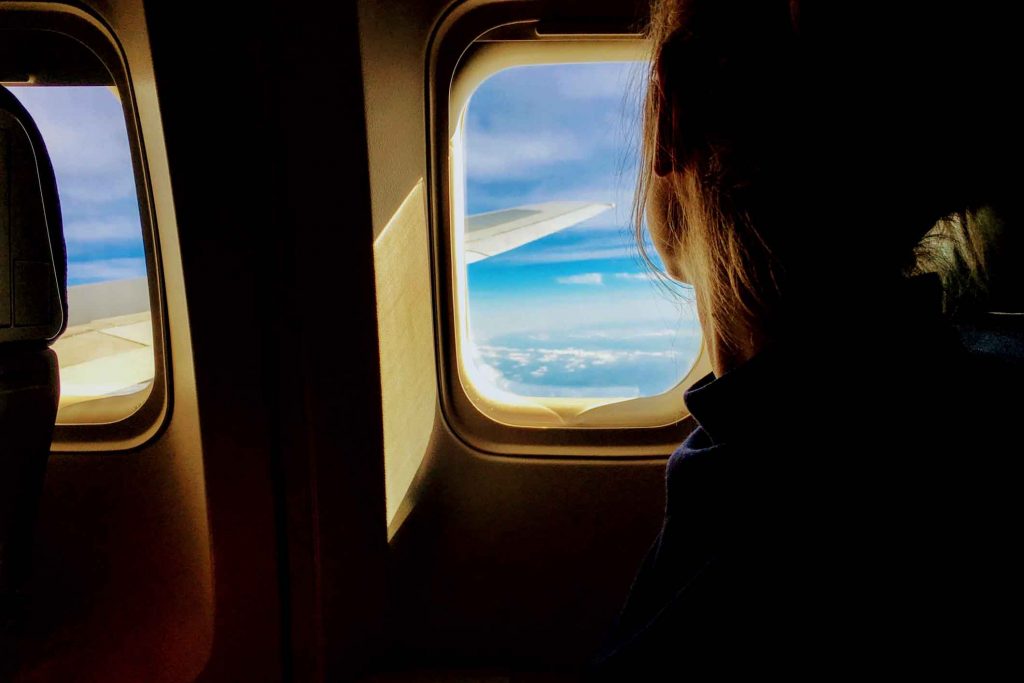 The Fes-Saïss international airport allows you to travel to Fes by plane. Many flights are scheduled from all over the world and low-cost agencies like Ryanair or Transavia offer some of them. If you want better flight conditions, companies like Royal Air Maroc will do that for you. Flight durations vary depending on the country you’re flying from.

As for the trip from the airport to the city of Fes, driving there would be the most convenient option. You can take a taxi at the airport at a fixed rate of 120 dirhams ($12). You might be asked to pay more so make sure to insist on that fixed-rate before you jump into that taxi. You can also book a private transfer service online.

As far as on-site transportation is concerned, most of the attractions we’re recommending you to visit are in the Medina so you can simply walk down the small pedestrian streets there and you’ll be good to go. The Medina of Fes is also the largest urban pedestrian area in the world! If you want to visit the city with a local guide to learn more about the places you visit, you can book this tour online.

You should pick your accommodation in the Medina; it’s the ideal location to visit the city, also called Fes El Bali (nothing to do with Bali in Indonesia) which simply means “the old Fes”. If you have a small budget, we recommend the Dar Elinor hostel which is located at the entrance of the Medina and offers decent accommodation in dormitories for only $10.

Ideally, you’d book a riad for a more authentic experience of Fes. We have selected for you here 5 of our best riads in Fes. One of my favorite is without a doubt The Karawan which is a real palace, to say the least.

It has a magnificent terrace with a breathtaking view of the city’s Medina. Amazing, isn’t it?

Tips aside, here are the most interesting places we recommend you visit in Fes. 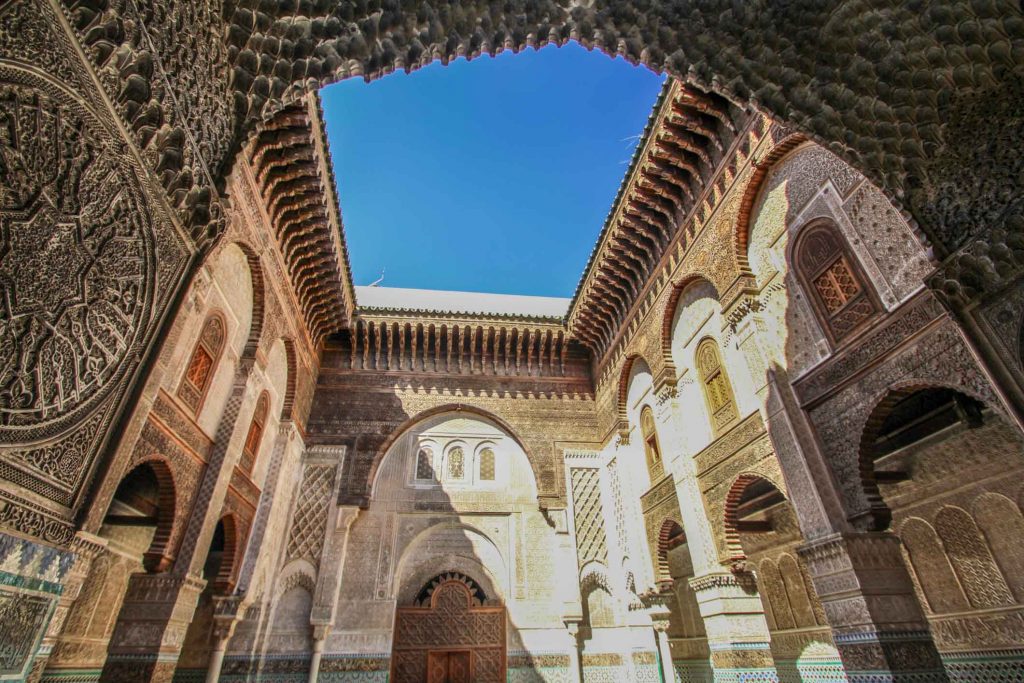 “Medersa” means “school” in Arabic and you will find many old Koranic schools in the Medina of Fes. Theology was taught there as well as many other scientific disciplines. One of those schools is the Medersa Attarine which was built in the 14th century by Sultan Abu Said Uthman.

It is quite small in size and could accommodate only 60 students. But it is known to be the most beautiful school in the city of Fes. It is indeed a real architectural masterpiece with amazing bas-reliefs and beautiful cedar furniture. A work of art to say the least! 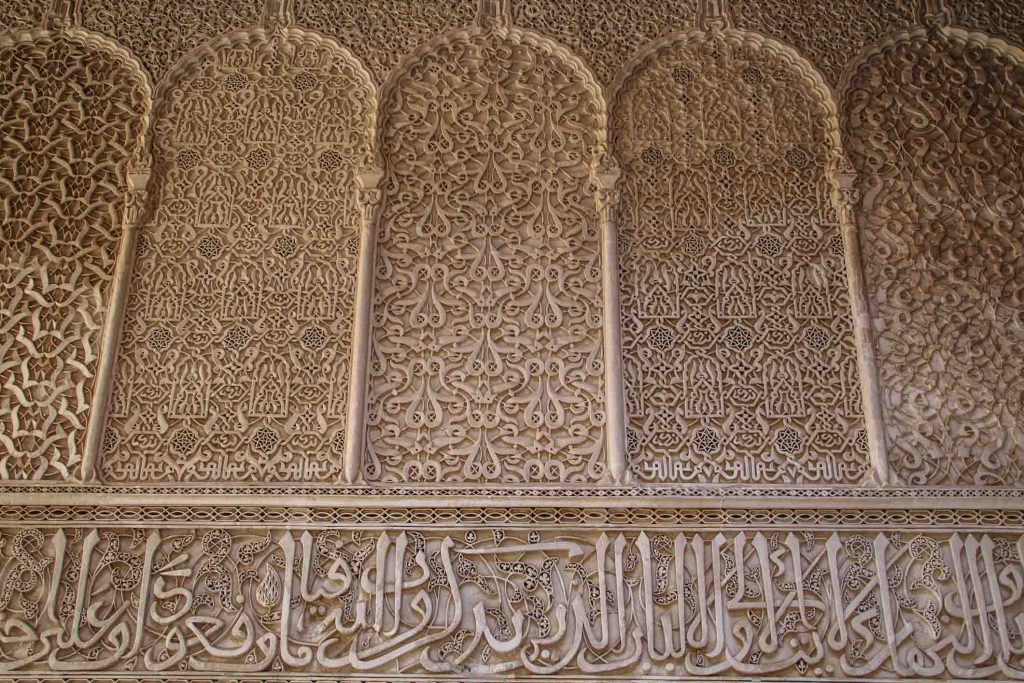 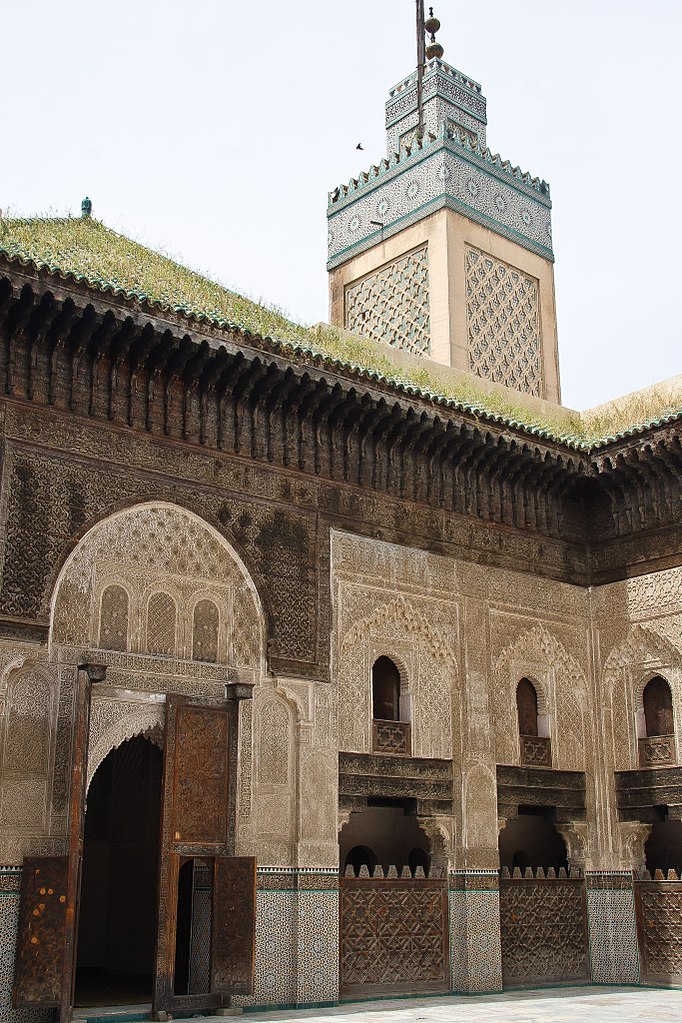 Medresa Bou Inania is also one of the most visited schools in Fes. It also has a minaret! Religious people went to the Medresa Bou Inania to pray on Friday (a holy day in Islam). More importantly, even though it is a Muslim place of worship, this school is open to non-Muslims and is an opportunity for everyone to learn more about the local culture. 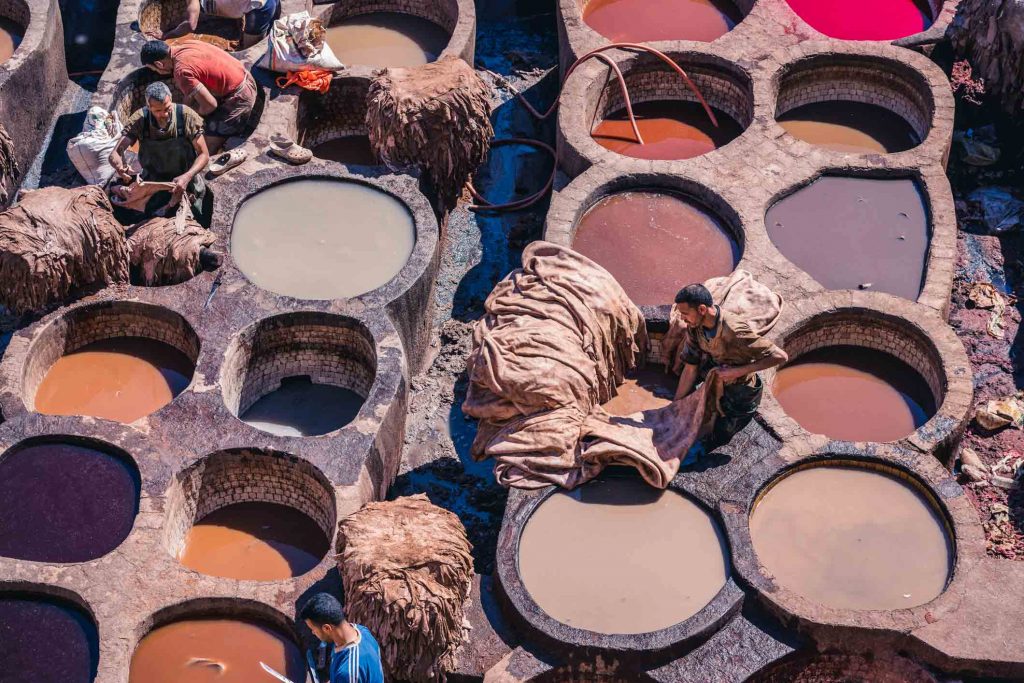 The city of Fes is also known for its traditional craftsmanship and especially its leather products. If you’re interested, you can to take a tour of the tannery of Chouara which is located north of the Medina. It is one of 3 big tanneries in Fes and was built in the 11th century!

Tannery workers still use traditional methods to produce leather. The process is simple: the skins of cows or sheep are first limed (i.e. soaked in an alkaline solution). They are then treated with the dung of pigeons (you read well, pigeon poop!) to soften them. Once treated, the workers trample on the skins with their feet for hours under a blazing sun.

The skins are then soaked in stone pots containing natural dyes like indigo or saffron, for example. The last step is then to dry the leather. It will then be used to make bags, belts or babouches. 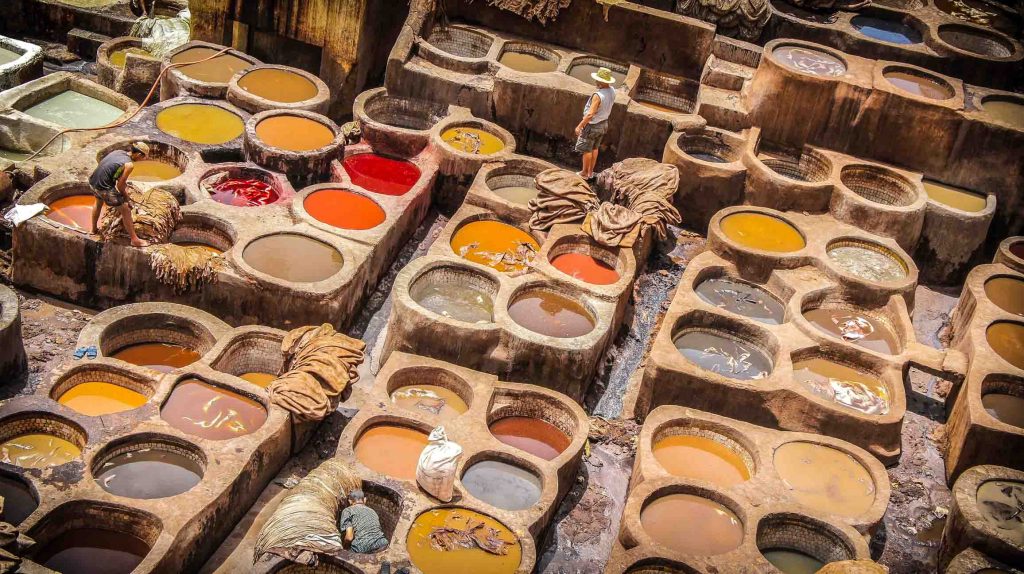 It’s an incredible process to watch and all the colors of the Chouara tannery will make for great pictures! Better not miss out on any of it! 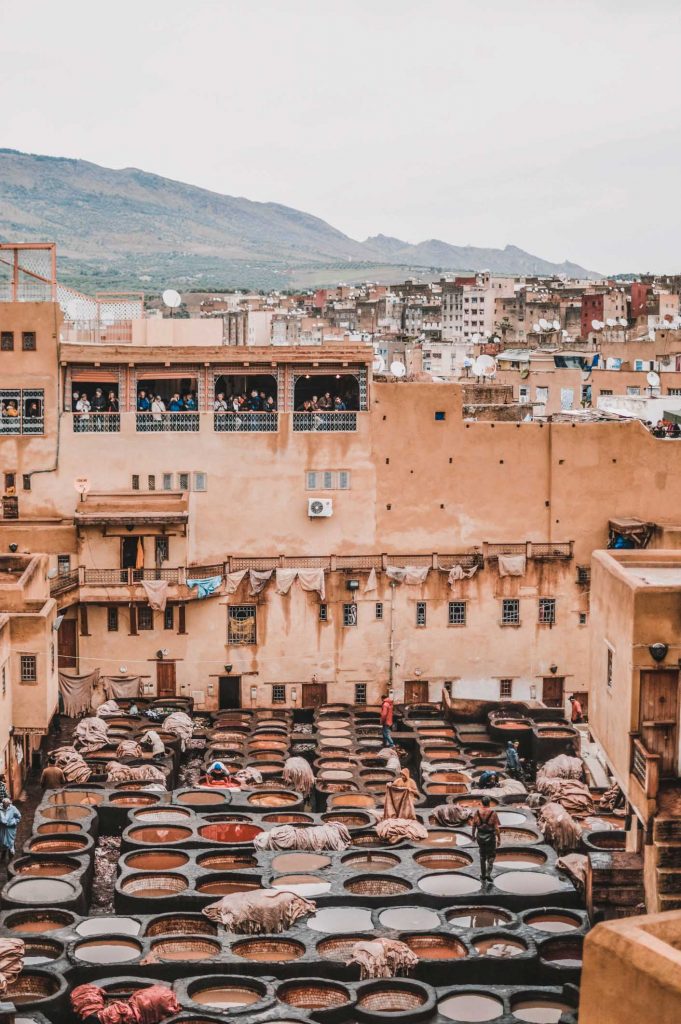 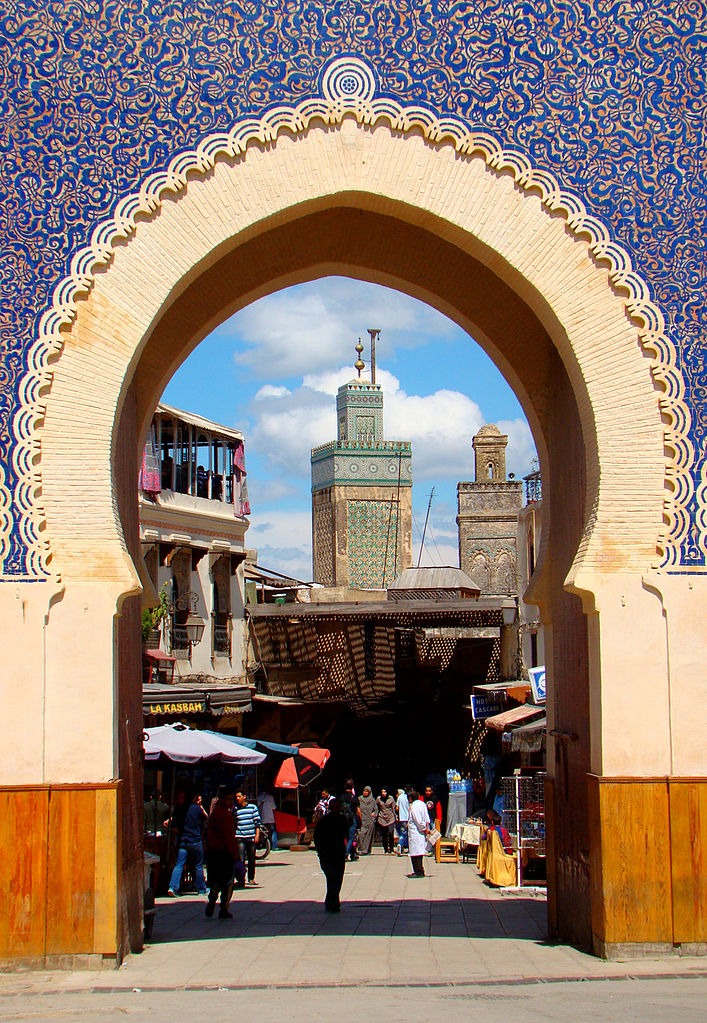 “Bab” means “door” in Arabic and Bab Boujloud is one of the gateways to the old city of Fes. It was built in the 12th century and is one of the most beautiful buildings in the Medina. Notice the blue ceramics that cover the upper part of the door, aren’t they amazing? The Medina in and of itself is an open-air museum, but it is still interesting to visit the Batha Museum to learn more about the local culture. It has a beautiful garden at the entrance and displays various crafts like embroideries, pottery vessels, carpets and much more. 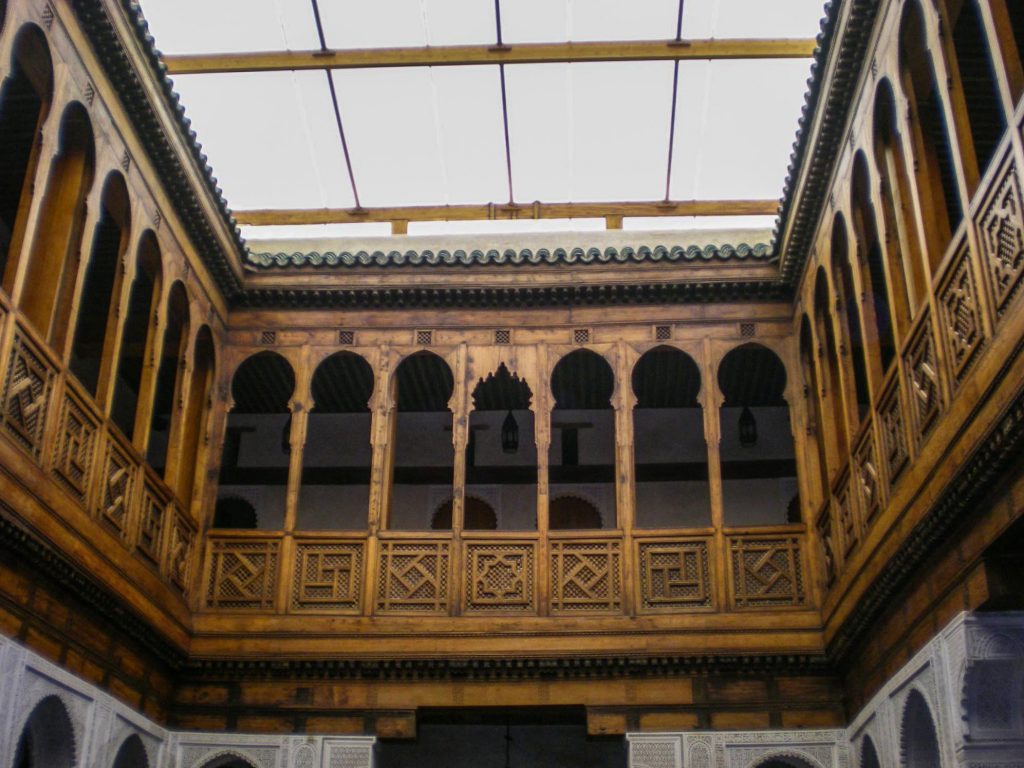 A “foundouk” is actually a caravanserai, a place where caravans could stop and travelers could rest, drop off their goods and let their camels recover. The Foundouk Nejjarine (“nejjarine” meaning carpenters in Arabic) is today a museum that exhibits the works of the city’s wood craftsmen.

It was built in the 18th century and is now a UNESCO World Heritage Site. Just outside the Medina, there’s a beautiful synagogue called Ibn Danan and built in the 18th century by the Danan family. This may seem surprising for some, but there has been a Jewish community living in the Maghreb for a very long time now and it has never been a problem for anyone. There are beautiful synagogues in Muslim countries such as Tunisia, the great Ghriba synagogue in Djerba is one of them. 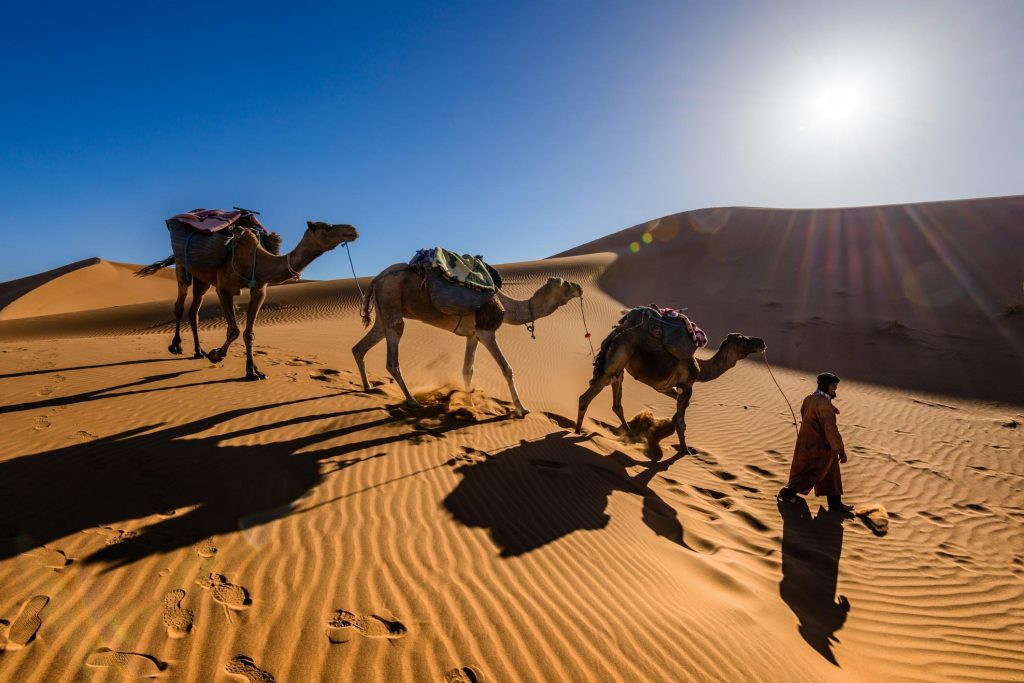 Our tour of the city of Fes is over, friends! As you can see, Fes, just like Marrakech, is one of Morocco‘s greatest and most authentic treasures.

If you have questions or comments about this blog post, let us know in the comments below.

Essaouira Morocco – Your Guide To Visit This Charming Coastal City

The Best Things To Do In Rabat Morocco & More Travel Tips